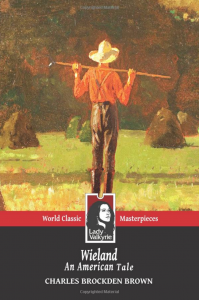 In this classic and timeless novel, we are immersed in a world that goes from sanity to insanity. In Wieland, we explore the realities of life on the eve of the American Revolution through religious delusions, fanaticism, and horrific violence. A family living on an estate outside Philadelphia is visited by mysterious voices, seemingly coming out of thin air. Soon thereafter, an itinerant character named Carwin will visit the family. Carwin is a mysterious stranger as well as a ventriloquist. Violence erupts when the family’s young patriarch believes that he hears God’s voice demanding a human sacrifice as a sign of faith. In the midst of all the insanity, the family will undergo a transformation involving horror, spontaneous combustion, false faith, psychological perversion, ventriloquism, and murder. Testing the limits of religious and literary authority in the new America, Brown’s novel has for more than two centuries kept readers debating questions of agency, accountability, and revolutionary politics as the story’s moral chaos unfolds.